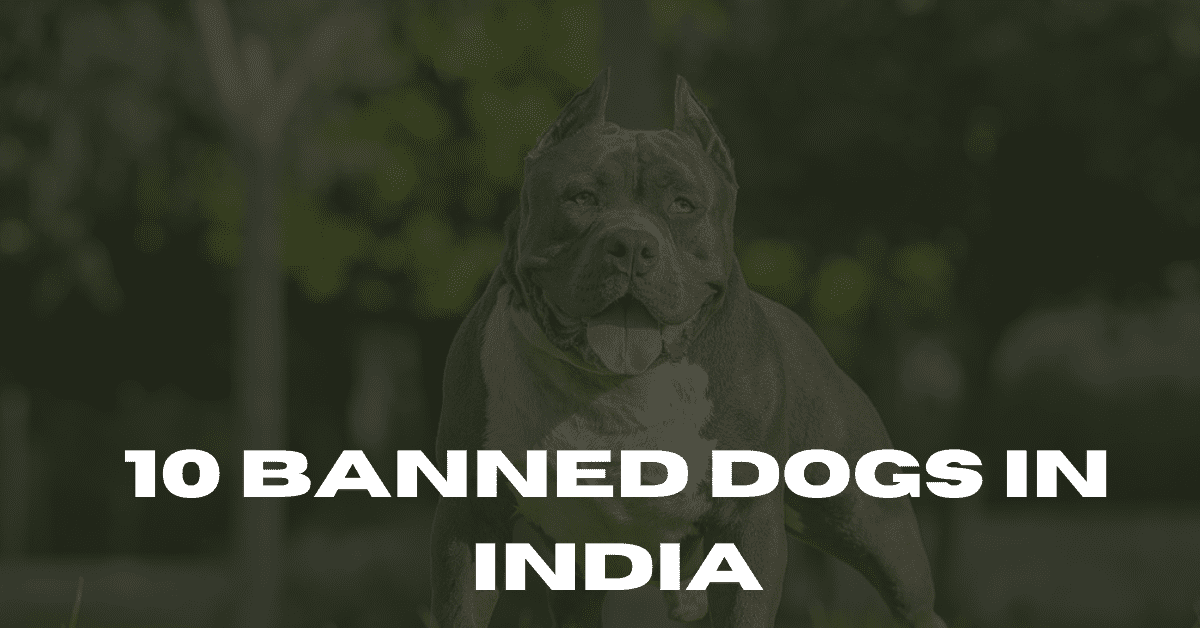 Dog owners in India are faced with an unfortunate reality: some breeds of dog are banned in India. Though the idea may seem unreasonable, especially to those who love their pets and want them to live a healthy life, the ban on certain dogs helps protect both people and animals from danger. With that said, here’s a list of top 10 banned dogs in India, along with their specific weaknesses:

American Bulldog is a muscular, large dog breed which is known for its balanced temperament and friendly nature. It’s great with children, but it’s important that you teach your kids how to interact with dogs because they can be territorial. If you have other pets in the house, they may try to fight them or chase them.

American Bulldog has a short coat that requires minimal grooming needs on a weekly basis unless your dog becomes dirty from playing outside or rolling in dirt. The American Bulldog does not require frequent bathing as long as it doesn’t get too dirty or smelly.

The American Bulldog is not suitable for guard duty because of their friendly nature; however, if you want one that can protect you from intruders then consider getting another breed such as Rottweiler which are more suitable for this role than the American Bulldog since these types tend to be more aggressive than their counterparts when confronted by strangers and will attack without hesitation.

The American Bulldog is a great family dog because of their friendly nature and ability to get along well with children as long as they are taught how to interact with dogs. Unfortunately, many people have a misconception that this breed of dog is ferocious.

A bandog is a large molosser-type dog, bred from a cross between a mastiff and bulldog. It has developed as a protector of property and family, with its powerful drive to protect. Bandogs can be aggressive towards other dogs and require early socialization in order to avoid territorial issues when it comes to strangers, especially those approaching your home or property. They are almost always very protective of their family and not recommended for homes where small children are present unless they have been raised by the family since puppyhood (8 weeks old).

Bandogs are very loyal and protective of their family and home, but they can be very territorial. They will not get along with other dogs and this trait needs to be considered when choosing a home for your new bandog. They require strong leadership from their owner, who must establish themselves as pack leader from the beginning.

Its thick coat protects it from all types of weather conditions and makes it an excellent watchdog during extreme temperatures as well as during hot summers or cold winters. The Neapolitan Mastiff has a short muzzle with loose lips that make it possible for them to breathe even when they are panting hard after running for long distances at high speeds (which happens often).

Wolf Dog is a hybrid dog breed. It is a mix of German Shepherd Dog and Siberian Husky. This breed was created in order to produce a highly intelligent, powerful, strong and independent dog.

Wolf Dog is another banned dogs in India. it is banned as it’s deemed dangerous for people around them. The reason behind this ban is that these dogs are very intelligent, playful and loving but at the same time they can be difficult to train due to their independent nature.

The Boerboel is a large, powerful dog that originated in South Africa. It’s a strong guard dog, so it’s not necessarily ideal for people who aren’t physically fit or don’t have the time to train their dog properly. The Boerboel is also very good with children and isn’t known to be aggressive with its family members. It makes a great pet for families because of its friendly disposition and playful nature.

The Boerboel has a strong personality and is a very loyal dog. It’s not recommended for inexperienced owners who want a pet that can be left alone for long periods of time because it does not do well when it’s left alone for more than eight hours.

This breed of dog originates in Argentina and was bred to be a working breed. It has a strong prey drive, which means it can be aggressive towards other dogs and people if the dog is not trained properly.

The Doge Argentino is a large dog that can grow to be up to 65 pounds. It has long, straight fur, which is usually white but can also be cream or blonde in color.

The Presa Canario is a large Molosser-type dog breed originally bred for working livestock. Due to its strong temperament and powerful physique, this dog has been banned in many countries.

The Presa Canario was developed by the Moors in Spain and was used as a guard dog, flock guardian, boar hunter and fighting companion. However, they are not recommended as pets because of their aggressive nature and tendency towards guarding territory.

The Presa Canario is a large dog breed with a muscular body, broad head, powerful jaws and strong teeth. The coat is short and coarse. The color of the fur can be black, brown or brindle but there should never be any white markings on the body. This breed has an average life expectancy of 10-12 years.

A large mastiff breed, the Fila Brasileiro is known for its agility and strength. It has a muscular body, with a deep chest and broad muzzle. The coat is short and dense, with black-coated dogs being more common than brown or fawn-coated dogs.

The Fila Brasileiro originated in Brazil as a cattle herder that would also hunt wild boar when necessary. They have been known to kill full-grown jaguars by themselves!

The dogs have a strong prey drive and are known to be very aggressive towards other dogs, especially those of the same sex if not trainer properly. They also require a lot of exercise and mental stimulation. If left alone for extended periods of time, they can become destructive or depressed.

The Tosa Inu is a Japanese breed of dog that was bred to fight. It is a large, powerful dog with a broad head. The skin is tight and well-defined muscles are visible beneath it. The body of this breed can weigh in at up to 61 kilograms).

These dogs have strong legs and forequarters that are ideally suited for carrying heavy loads or fighting other animals. Their coat colors include brindle, red fawn or black with white markings on the chest, toes and tail tip as well as white patches above their eyes.

Tosa Inus have been banned in many countries including India due to their aggressive nature which could lead them to attack humans when provoked or threatened by strangers entering their territory without permission from the owner first.

Pitbull Is In Top list – Banned Dogs In India

The Pitbull, a dog breed banned in India, is considered one of the most dangerous dogs in the world. The Pitbulls were originally bred for fighting and hunting – they were used to hunt bears and bulls.

Today, they are mainly used as guard dogs. They are very loyal to their owners but can be aggressive towards strangers. This is why they have been banned in many countries around the world like Belgium, Canada and Japan where they are considered as an illegal breed under certain conditions such as when they do not wear muzzles while being walked on public roads or parks etcetera.

The list of banned dogs in India is long and varied, but it’s essential to know why dogs are being banned. The main reason behind the ban on some specific breeds of dogs is that they have been known to be dangerous and aggressive. The courts of law have ruled in favor of banning specific breeds based on the evidence presented by animal activists who have experienced the dog’s aggression firsthand.

However, I would like to highlight that it is essential for us to understand that “There are no bad dogs, there are only bad owners”. Only proper awareness of dog parenting will resolve issues of “aggressive dogs.”

Here Are Some Tips On How To Become A Good Dog Owner/ Parent: