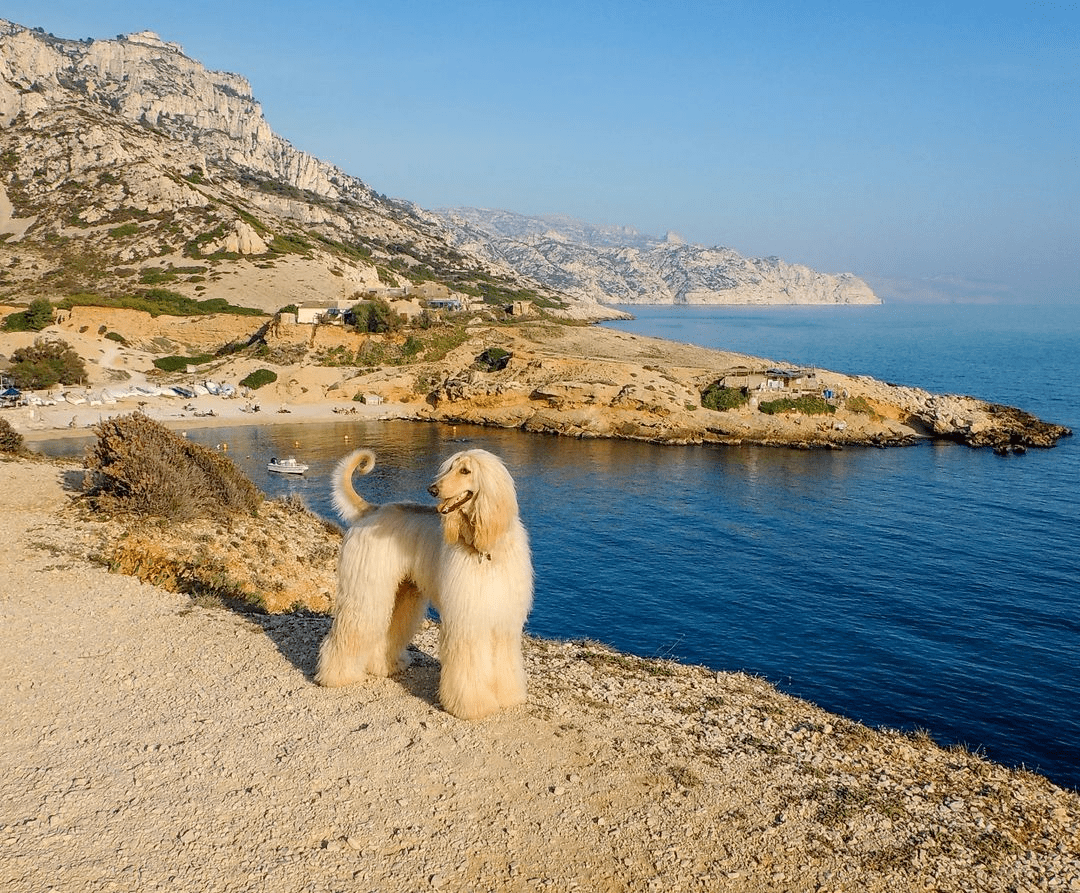 A dog that looks like it’s straight out of a Vogue magazine cover, the Afghan Hound may just be the chicest pooch in the world. These dogs are undoubtedly made for the spotlight, with their slender builds, smooth gaits, and aloof personalities.

The dogs were built for hunting in the cold mountains of Afghanistan, despite their fashion model looks. The Afghan Hound is a fascinating breed of dog. They are known for their independence and aloofness, but they are also gentle and loving companions.

Here are 10 interesting facts about the Afghan Hound that you may not have heard off !

Unfortunately, only a little can be said with certainty about the Afghan Hound’s origin, as these dogs have been identified as a basal breed that predates the emergence of modern breeds.

Legend has it that the Afghan Hound was the dog rescued in the Norse Ark rock carvings and caves in Afghanistan, which suggests that the dogs came over to the country with Alexander the Great’s army. However, some experts today surmise that the breed is related to the Saluki, another dog breed with ancient origins.

Nomadic tribes used them to chase down hair and Gazelle over the rocky mountainous terrain and gave the breed its local name Patsy spay, and the breed found its way to England with British soldiers who brought them back in the early 1900s. It was known in the name of Beraksi hounds, Cobble hounds, and Greyhounds. The American Kennel Club later transported the dogs to America, and they were recognized as African hounds in 1926.

Afghan hounds are large dogs that measure 24 to 29 inches tall and weigh 44 to 60 pounds. A regal appearance, a smooth face, and a silky coat are what make them stand out the most.
These dogs come in a wide variety of colors, the most common of which are black, black, tan, red cream, blue Brendel, Domino, or white.

Many Afghan hounds also have black facial masks, and some even have facial hair that looks like a mustache. Their prominent tips, large paws, seemingly exaggerated bend at the knees, and a tail ending in a doughnut bend give the breed a distinctive profile.

Afghan pups, however, do not look like long-haired adults. That fuzzy hair on their cheeks called Monkey whiskers and some over their saddles. The short fluffy puppy coat begins to fall out at about one year of age, giving away to the glossy, steadily lengthening adult count.

The Afghan hound quickly rose to fame in America as one of the most glamorous dog breeds. Artists, actors, and singers became enamored with them during the 1970s, and they briefly became status symbols.

The Afghan Hound of Spanish painter Pablo Picasso is even said to have inspired him. He also displayed the Afghan Hound in many of his paintings. It has also made them popular with filmmakers who have made notable screen appearances, such as Universal Pictures Balto, Disney’s Lady and the Tramp, and 101 Dalmatians. Their distinctive appearance has made them popular with viewers.

Due to their origin as hunters bred to think on their feet, the Afghan Hound is strong-willed and independent with an aloof and self-confident personality.

However, the temperament of this breed cannot be pinned down so easily. According to dog parents, their descriptions often contradict each other, with the dogs being described as dignified and brave at times, and as clownish and timid at others.

The persona ranges from loving to downright stand-offish, so you can only hope that you don’t get the short end of the stick.

However, one thing you can be sure of is that your Afghan Hound will eagerly greet your guests. This is because they tend to be indifferent to strangers, making them terrible guard dogs. These dogs are best suited to either being a one-person or one-family dog that can be loyal and gentle, but an independent member of the family.

Nomadic Afghan tribes prized Afghan hounds as excellent hunters. They were selectively bred over the years better to suit Afghanistan’s cold mountains and rocky terrains. One feature that resulted from this breeding is that dogs usually have higher placements and are wider apart than other breeds.

This allowed Afghan hounds to make quick turns and maneuver around the uneven terrain of the Afghan mountains. In addition, this is also the reason why these dogs are among the fastest canines.

The average Afghan Hound can read up to 40 miles per hour, allowing them to compete from toe to toe with some purebred racehorses. For reference. The fastest racehorse ever measured achieved a speed of 43.97 miles per hour. Models, hunters, and athletes take them seriously. What’s there not to like about these dogs?

As hunting dogs that chased after prey and followed their human masters, Afghan hounds needed to be able to think for themselves. As a result, they’re extremely independent by nature and don’t really like being told what to do.

Stanley Coren. His book, The Intelligence of Dogs, ranked Afghan hounds last among 138 breeds based on their ability to understand and obey commands. And his findings. On average, these dogs needed more than 80 repetitions to understand a new command and obeyed the command on the first try less than 25 percent of the time. For added confirmation of his findings, he consulted 199 breeders as to the most obedient dogs and found that most ranked the Afghan Hound among the lowest 10 breeds.

So if you’re looking to get an Afghan Hound for yourself, be prepared for some long and frustrating training sessions. And remember, positive reinforcement and patience work much better than trying to scare your dog into doing your bedding.

In general, dogs with a history of working with numbers by nature require a fair share of daily exercise. Afghan hounds with their history as hunting dogs are no different. They need to be walked for at least a mile or two daily and a spacious yard for them to run around in is ideal. On top of that, a few games and tricks provide them with much-needed mental exercise.

Aside from hands, these dogs will chase after small animals and automobiles, so they will let you Afghan off-leash. With proper training and monitoring, these risks can be minimized to some extent. They’re also excellent for making sure your yard is secured with a tall fence.

As long as you can meet your dog’s exercise needs they’ll be a quiet and well-behaved house dog. A lack of exercise, however, can lead to destructive behavior, so make sure to dedicate some time every day to shaving off your dog’s energy.

For dog owners, a telltale sign of whether their dog is being fed too much or too little is the dog’s weight. However, when it comes to Afghan hounds, that method is not as helpful as Scytale since these guys have naturally slim physiques.

So even when they’re perfectly healthy, their protruding hip bones look quite prominent, which is not a sign of being underweight. That said Ashkan hounds are athletic, active dogs so be mindful that your dog is getting enough nutrition to meet their needs. We recommend around two to two and a half cups of high-quality dry food a day divided into two meals.

However, dogs are individuals, and each dog has different dietary needs depending on various factors like age, activity level, and size. Consult your vet and your breeder for advice on your pup’s nutrition and work together with them to formulate an effective diet plan.

While the glamorous and silky coat of the Afghan Hound may look stunning, eye-catching coats like these are almost always high maintenance. When properly groomed, Afghan hair is very fine, similar to human hair, thick and silky.

While tangles and maths are easily formed when grooming needs are not met, keeping the hair clean and math-free is the key to keeping the brilliant code looking fresh. Hence, regular brushing, along with frequent baths using dog-friendly shampoo and conditioner, are essential for your Afghan Hound.

Don’t forget to brush their teeth daily and trim their nails regularly as well. Dogs with hanging ears tend to have issues with infections, so check your dog’s ears weekly and clean them using a cleanser recommended by your vet. This time-consuming and difficult grooming routine makes these dogs ill-suited to first-time owners who will likely have to hire a professional groomer.

Similar to other breeds of their size, Afghan hounds live for around 12 to 14 years and are prone to a few health conditions. These include allergies, infections, cancer, cataracts, and hypothyroidism, which is a disorder of the thyroid gland. One thing that owners have to be wary of though, is anesthesia.

Si Townes, these dogs have naturally low body fat scores, so they tend to be sensitive to anesthesia. So if your pup is having surgery that requires anesthesia, make sure to let your vet know ahead of time just in case. Breed experts even recommend seeking out a sighthound-savvy veterinarian for surgical procedures.

Aside from that, though, there’s not much for owners to worry about as these dogs are quite robust by nature. Remember to schedule a routine visit to the vet and don’t forget to get all necessary health clearances from your breeder when getting an Afghan Hound.

All right and that brings us to the end of our list of the Top 10 Interesting facts about the Afghan Hound. Thank you so much for watching the video. Although many people are charmed by these dogs’ glamorous appearance not everyone can handle the high-maintenance lifestyle that these fashion models live.

The Afghan Hound is an interesting dog breed with a lot of history. These dogs are known for their hunting abilities and their beautiful coats. If you are considering getting an Afghan Hound, be sure to do your research to make sure this is the right breed for you.

Do you think the Afghan Hound would be a good fit for you?