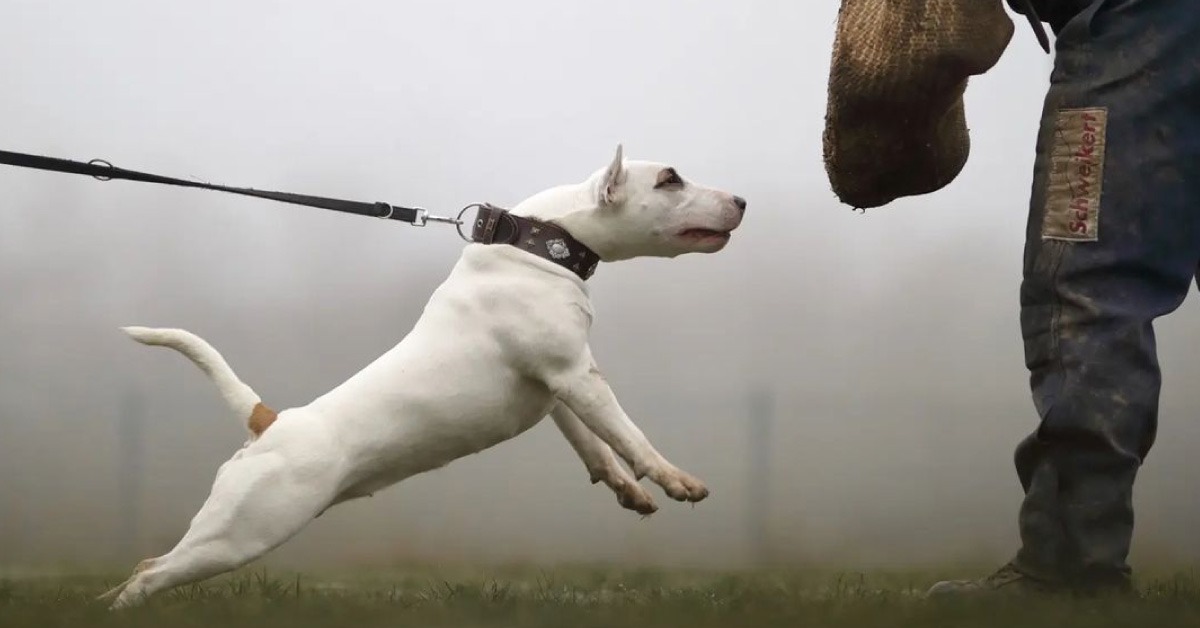 The Origin and History of Gull Terrier Dog Breed

Introduced in the northwestern Indian subcontinent during the British Raj, Gull Terrier is a dog breed more than 100 years old. It is related to the English dog ‘Bull Terrier’, a crossbreed between a bulldog and a terrier dog.

The result was the ‘Gull Terrier’. Initially, similar to its English cousin, the Gull Terrier was used for public entertainment in animal blood sports such as bull-baiting and dog fighting, introduced by the Britishers in India. But after these sports were illegalised, these fearless canines took up guarding duties.

In the present day, this breed is found in the Punjab region of India and Pakistan, where they are respectively known as the ‘Indian Gull Terrier’ and the ‘Pakistani Gull Terrier. Also shortened as ‘Gull Terr’, this breed is ancient, but its presence has become rare. The Gull Terrier was also further bred with other breeds such as the Bully Kutta, evolving into a new breed called ‘Gull Dong’.

Being of the mastiff type, the Gull Terrier dogs are medium-sized, tall and broad-chested. Their muscular body helps them with agility and speed. The peculiarity of these dogs is their large ears that stay erect at all times.

They have a short-haired, smooth coat that is generally white. Some also have faint dark-coloured markings all over their bodies and faces. Like their ancestors, the Bull Terrier, they do not have distinctive egg-shaped faces. The Gull Terrier has a short muzzle and small eyes.

The Gull Terrier dogs are known for their aggressive temperament. It is not surprising, considering that they were used in blood sports such as dog fighting. Later on, since they started being guard dogs, their aggression was directed towards strangers to protect their owners and properties. Their vigilance, prey drive and loyalty make them excellent watchdogs.

Gull Terriers are not easy to control unless they are trained and socialised from a young age. Experienced dog owners can find it easier to train these big dogs. You need to display leadership qualities and keep the dog under control, or else their aggressive nature can drive them towards destruction.

Gull Terrier dogs can be trusted around kids of the family provided they are trained well. But, be careful if the Gull Terrier is around other unfamiliar children. They tend to attack anyone that appears as a threat – even children.

Cats and other non-canine pets are not their favourites either. So, leaving the Gull Terrier around such animals is not a good idea.

Having a history of being a sports dog followed by a watchdog, Gull Terrier dogs are endowed with high energy levels. It means rigorous physical activity is their daily requirement. They are also routine bound dogs and need to exercise as per schedule.

Gull Terrier dogs are easy to groom and maintain due to their short-haired coat. This breed sheds hair normally, and combing the coat with a firm bristle brush 1-2 times a week is suitable for its needs.

You should not bathe these dogs too frequently as their skin can dry out. Since the colour of their coat is white, it can easily appear dirty. In such cases, you can wipe them with a clean, wet cloth and bathe the dog only when necessary.

Temporary or permanent deafness and blindness are common problems recognised in Gull Terrier dogs. Apart from these health issues, it is a fairly healthy dog breed.

The Gull Terrier is related to which dog?

How old is the Gull Terrier dog breed?

Having originated during the British Raj in India, the Gull Terrier dog breed is around a century old.

There is not much information about the banning of the Indian Gull Terrier. However, some sources suggest that its ancestor, the English Bull Terrier dog breed is banned in parts of the USA and UK due to their aggressive behaviour.

Where is the Gull Terrier currently found?

The Gull Terrier is found in present-day Punjab regions in India and Pakistan.

How to recognise a Gull Terrier dog?

It is easy to recognise a Gull Terrier dog breed due to its distinctive features such as a smooth, white-colour coat with faint black spots, broad chest, short muzzle and muscular, tall body.

These ancient dogs are rarely found in today’s times. However, their 100 years of history have seen them from being entertaining sports dogs to fearless working guard dogs. If you find a Gull Terrier and decide to adopt it, ensure that you are living in a house with spacious surroundings.

Secondly, having some prior experience with training dogs gives you an upper hand as these dogs can be challenging to train. Although primarily aggressive, their undying loyalty towards their owner is admirable.